For a self sustained garden

This is the simplest system I could come up with that is capable of irrigating a couple of pot plants in my small balcony garden for several weeks without my attention. It was designed to carefully measure the water quantity for each group of pots/plants and run completely off the grid - that means no electricity and no water connections, at all. 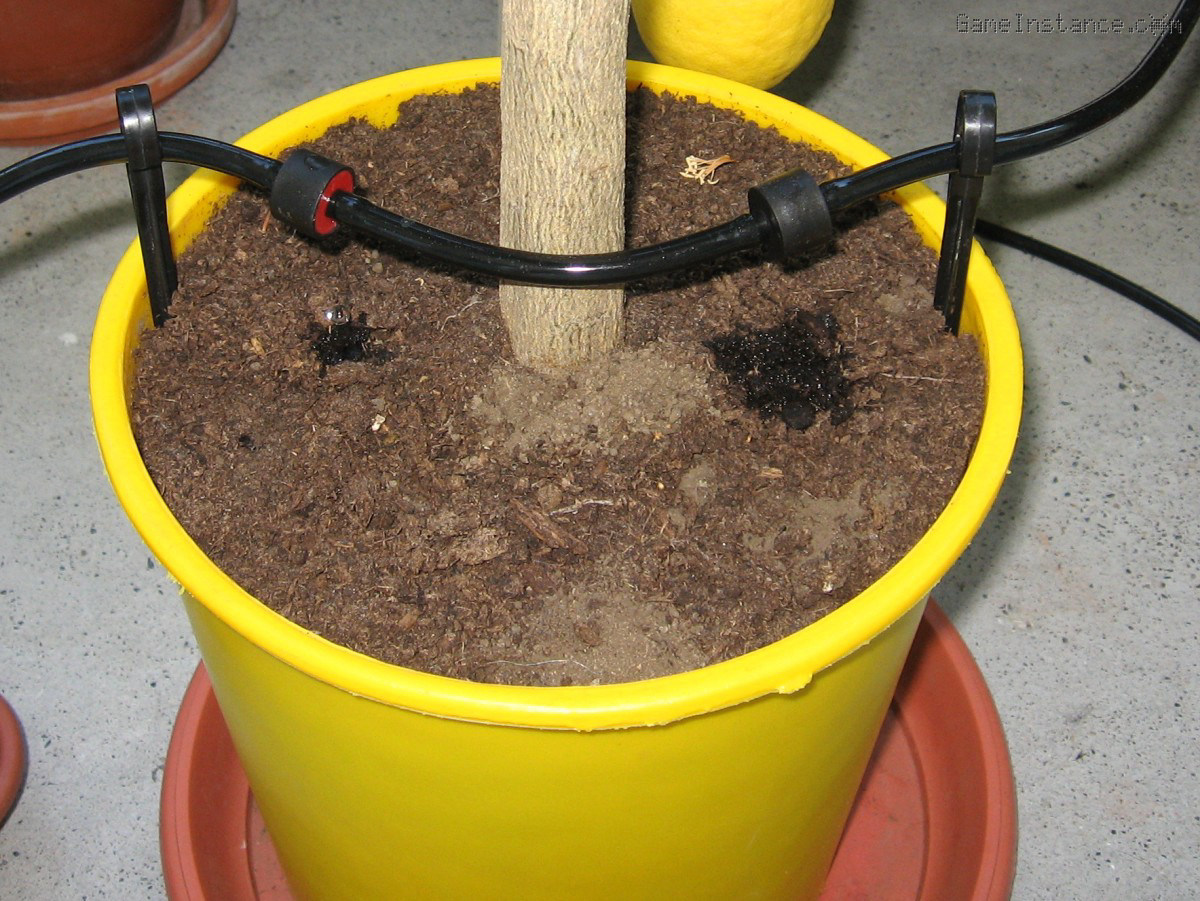 This is not really an automation but rather a scheduled system. It has no feedback from the plant, say soil humidity level, and that's for simplicity sake. It does what I would have done instead, every day: put water in each pot.

Here's how it works

At given intervals an electric pump draws water from a tank into a couple of bottles until they fill up. Gravitation does the rest of the work. The water in each bottle seeps into an independent drip irrigation system that serves a group of pots. Once a bottle is filled up, it is a matter of time - usually minutes - until the plants in the associated group get fully irrigated with the water in it. 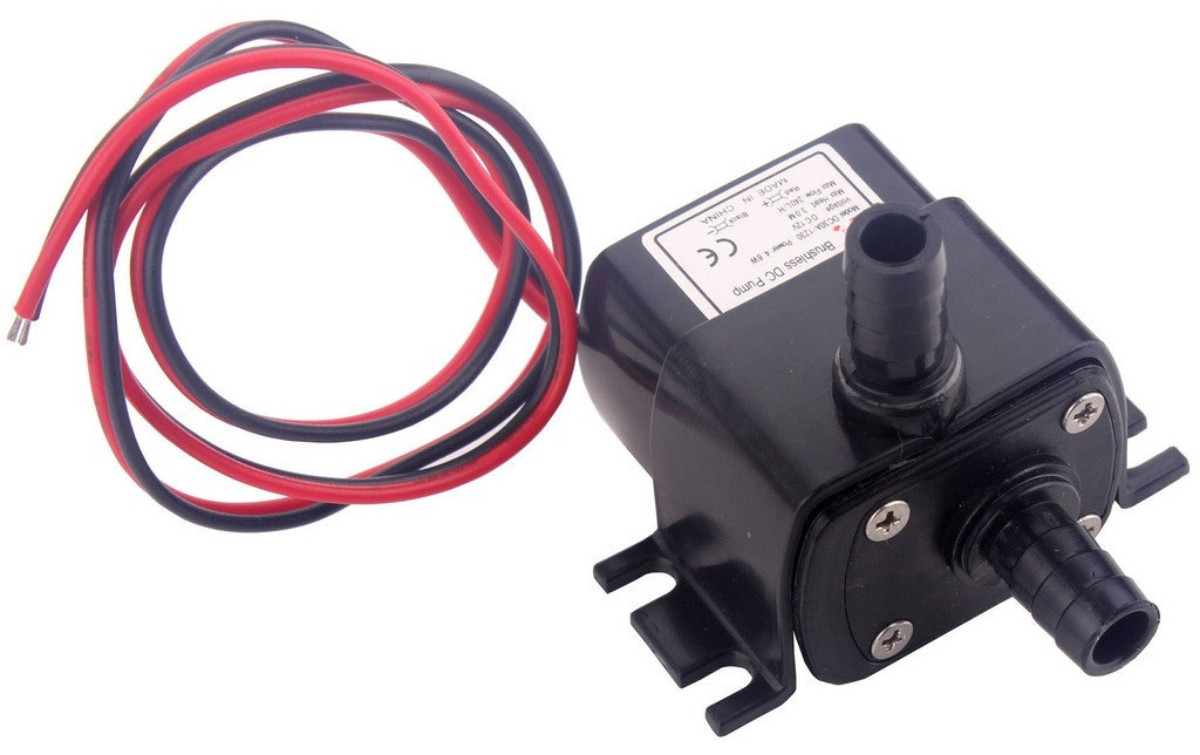 The bottles need to be a bit higher than the water tank so that the pump can actually control the flow. If they're somehow lower than the water level in the tank, the pump will start the flow but will be unable to stop it. Also, the drip irrigation system needs to be mounted on a lower level than the bottle that feeds it. Without that difference there will be no dripping flow and the plants will starve. As previously stated, the gravity needs to be allowed to do its part. 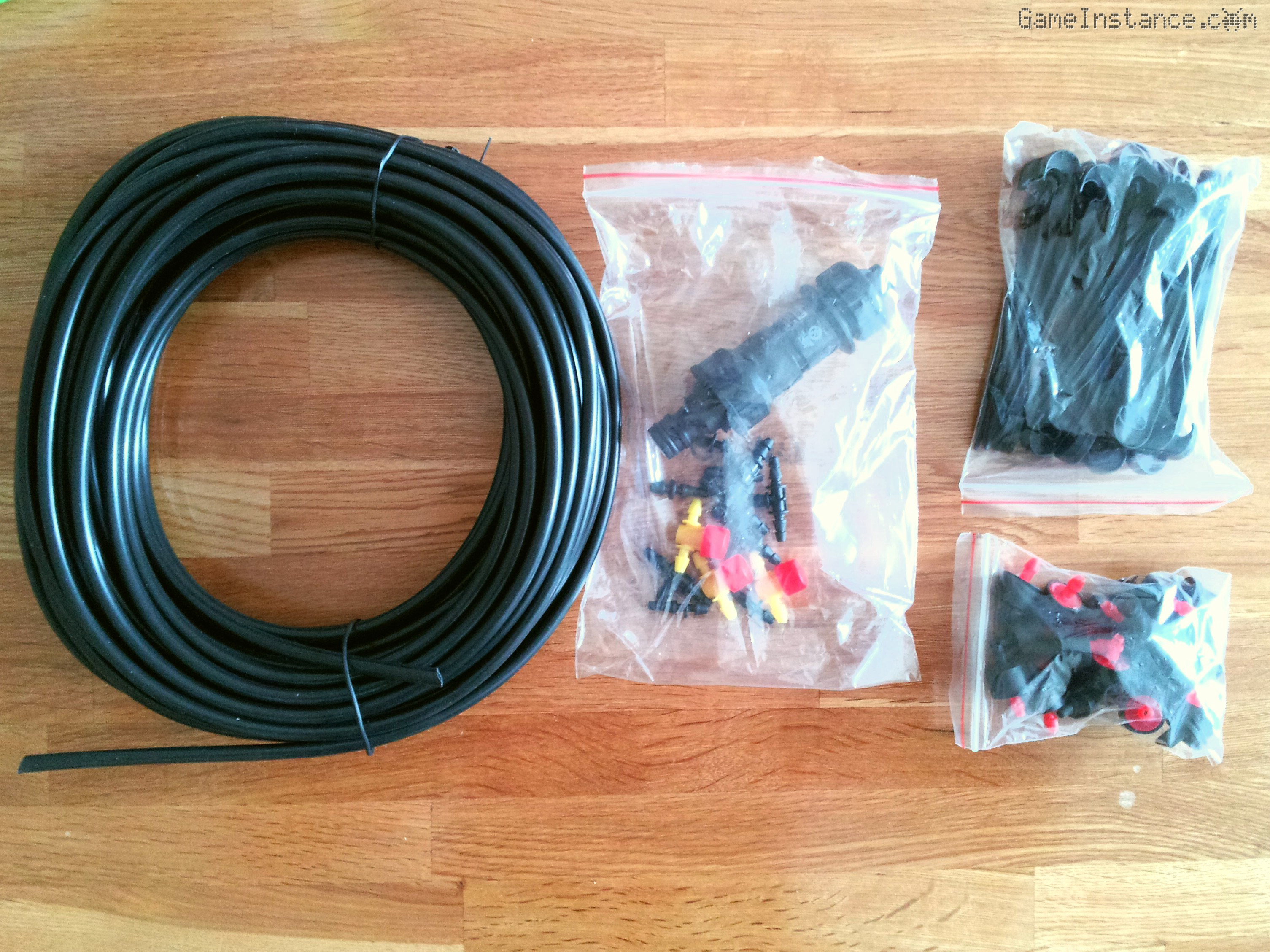 It all works nice and dandy for one bottle and a group of pots linked to a drip system. That could be sufficient for a really small garden but as your garden grows - and it will - you'll need to enlarge the dripping system and consequently use bigger bottles. Even though all dripping heads are built to have the same flow, the tiny clogging particles will ruin this equilibrium over the course of time. You'll then have plants that get less water than other and you don't want that. The safe scaling solution is to be using more bottles with individual dripping systems. Having more bottles means having more pumps and filling sensors with the added cost and complexity - or does it?

is to interconnect the bottles in a cascade configuration. Instead of filling a bigger bottle you fill the up-most bottle. The overflow of that will then fill the second bottle and so on. The last bottle in the cascade will contain the "bottle-filled" sensor that will stop the pump. 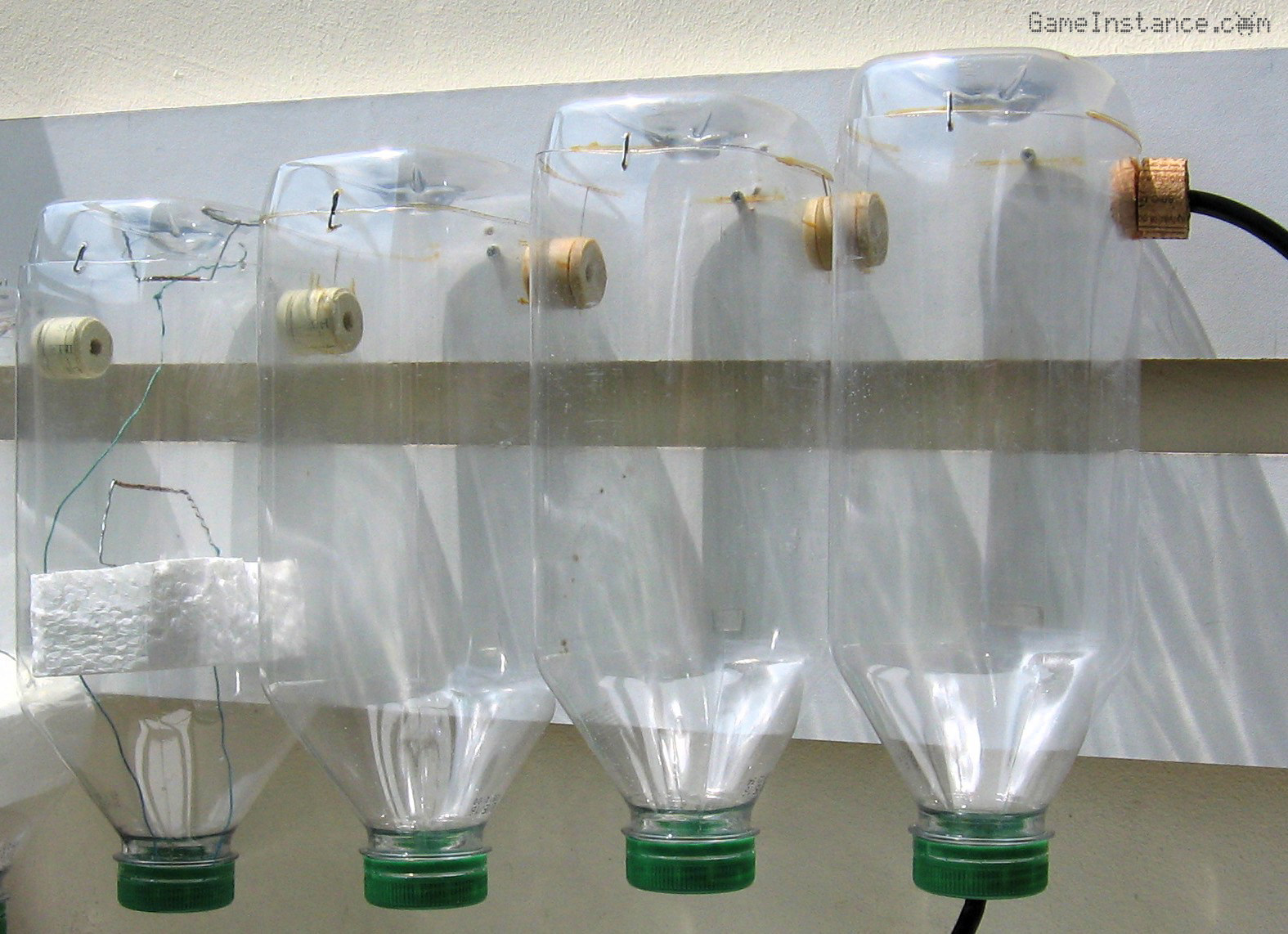 Intermediary bottles - in the cascade configuration

The bottles in my cascade setup are supported vertically side by side against a MDF board. A screw holds each bottle in position and a piece of double-side adhesive tape prevents the rotation around it. The water connections are made using sections of drilled cork plugs. The contact between the plastic bottle and the cork is tight enough not to allow any water leakage. The last bottle in the cascade contains a polystyrene floater that closes a circuit when it gets filled. Corrosion will affect the water vapor exposed contacts and a higher contact pressure will be needed. As such, the bigger or thicker the floater the better.

though not obvious at the first glance, is that each independent drip irrigation system can be mounted at any height as long as the flow pressure is sufficient. This means that it can be used successfully in gardens having plants both on the ground and on different other levels. Some of them will be irrigated faster than other but they will all get the same amount of water.

Least but not last, the volume of water is kept under control by the use of the intermediary bottles as long as the fill time is kept as short as possible and the dripping time longer. Knowing the volume of your tank, you can determine your system's autonomy, in number of days. For example, if the tank has 40 liters and the cascade contains four bottles of one liter each, the system could get up to 10 irrigation cycles. For one irrigation every two days you then get 20 days of independent watering.

I've learned quite a few things from this experiment. The first is that the water in the tank won't stay pure for long. The particles in the water will pass through the pump in the bottles and then in the drip system. With time the drip heads will clog. You'll be forced to disassemble all the system and wash it piece by piece and you really don't want that. The easiest way of circumventing the trouble is to use a water filter. For this purpose I have modified a Brita filter and connected it to the pump inlet. Once it gets filled with water it stays on the bottom of the tank. It is important to keep it filled with water and I'll explain why. The air bubbles in the filter will get sucked in the pump and prevent it from pumping which is as bad as it can get. So before you put it into action make sure you prime the pump and the filter. 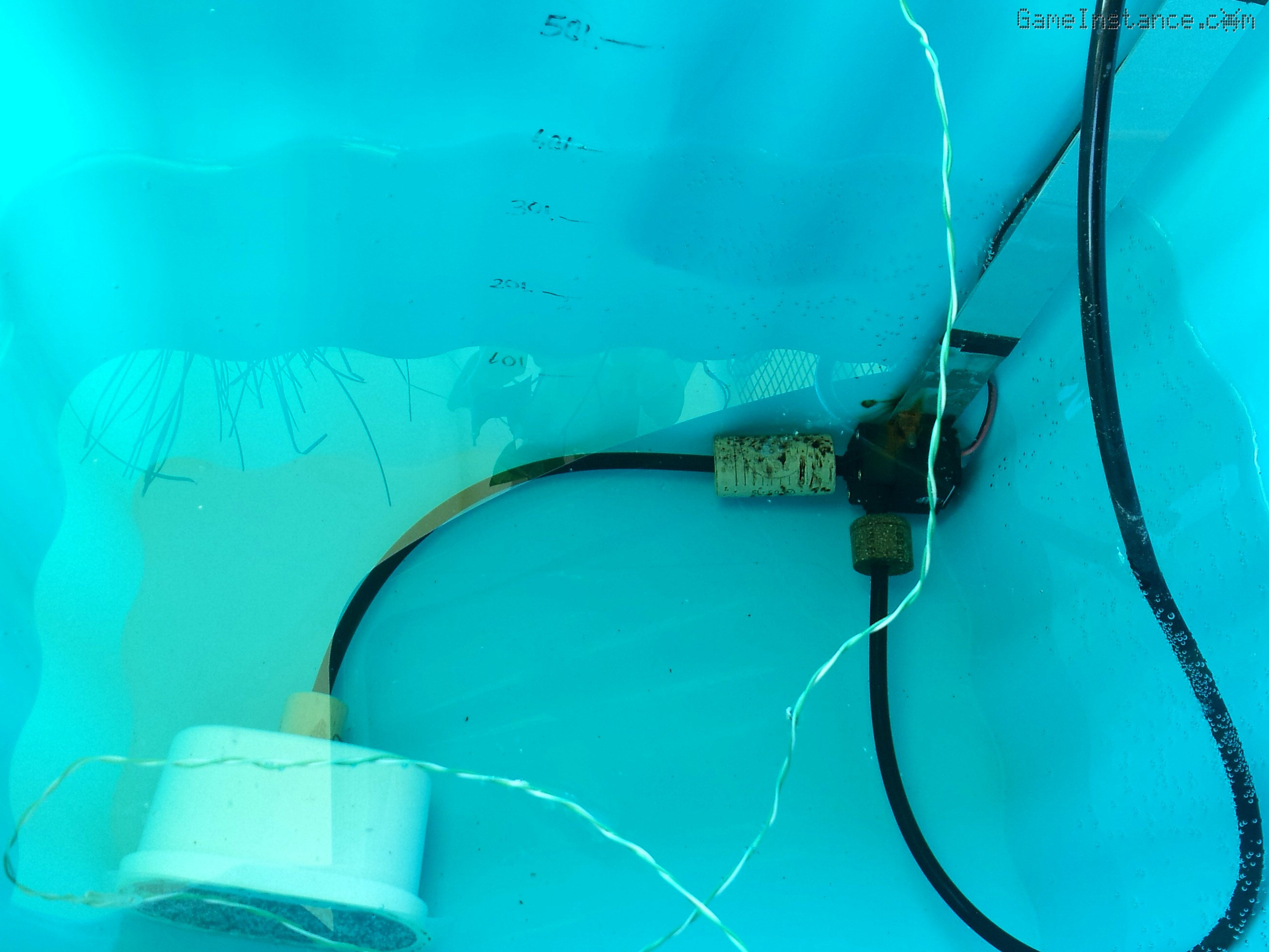 Water reservoir - with the pump and the modified water filter

Such a system - working with water, that is - gets affected by the limescale deposits. They form when the last droplets dry out and they reduce the dripping flow of the affected head. One way of avoiding this is to keep the dripping pores upwards and let the water droplets form on the other side of the dripping head. 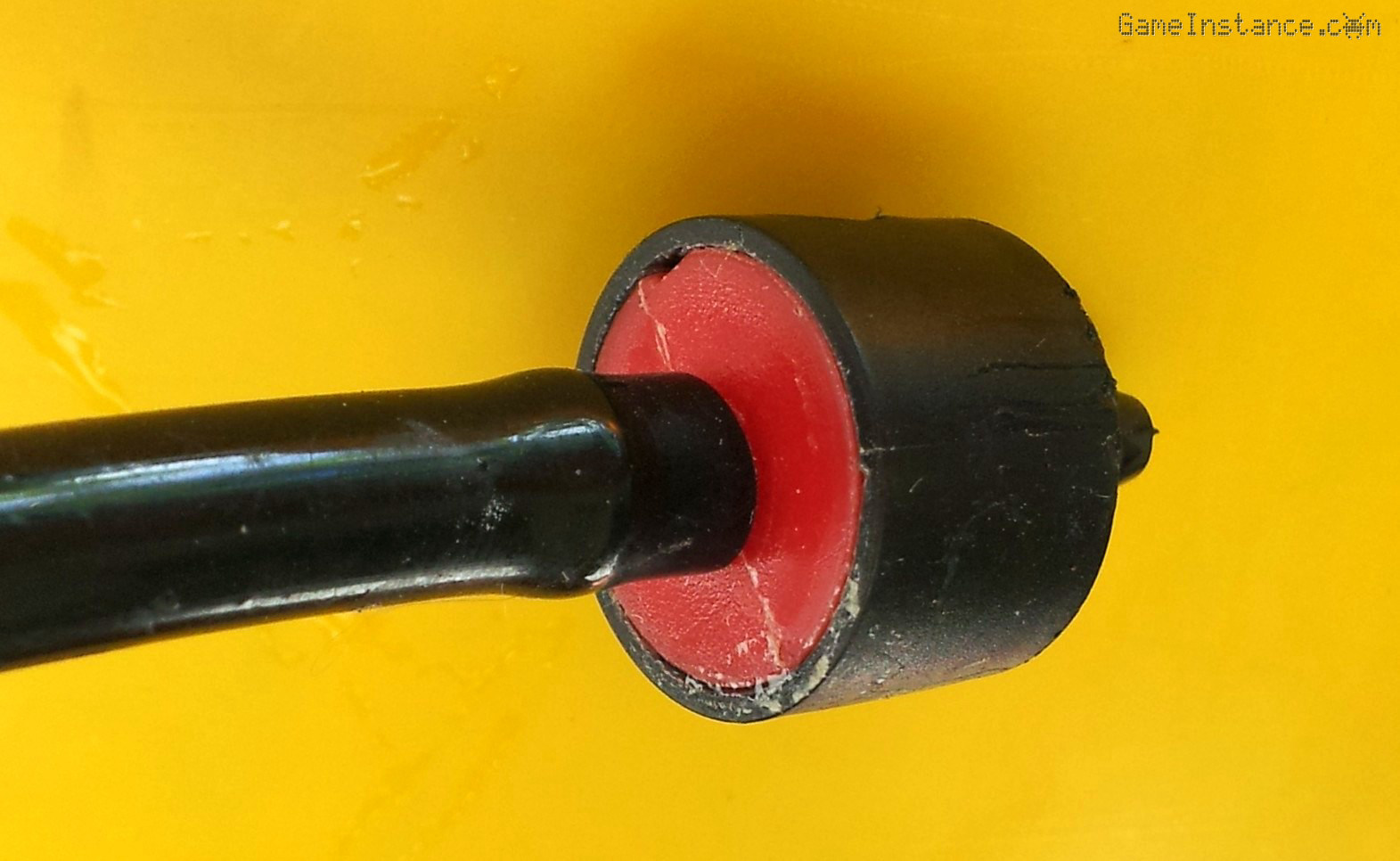 Drip head - the drip pore the the top, the limescale formation at the bottom

After months of tweaking and fiddling I have found this to be a reliable irrigation system that is both easy to make and easy to maintain - it has all the components above the ground. Changing the configuration of the pots or the amount of water to be put in a certain pot takes only a couple of minutes and boils down to unplugging and plugging back drip heads and flexible hoses.

Do tune in again for the electronic part of the system and for more tips about improving the setup.